SANDESA Awakens the Spirit of Patriotism 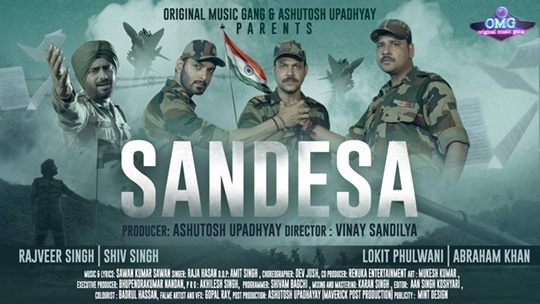 Mumbai – On this 15th August, the Amrit Mahotsav of Independence is being celebrated with great enthusiasm and fervor all over India. Expressing his goodwill towards the country, in the memory of the brave soldiers who have always sacrificed their lives on the border for the safety of their motherland, Producer Ashutosh Upadhyay is presenting his original music gang, Banratle, a passionate patriotic song “Sandesa”. Written and composed by Sawan Kumar Sawan, this song is sung by famous Bollywood singer Raja Hassan, and Vinay Sandilya is the director of this song.

Producer Ashutosh Upadhyay says, “The young men are waking up day and night on the border, so we are living a life of peace, the song has been composed to thank them wholeheartedly”. Director Vinay Sandilya says about the song, “The story of this song is like the name of Sandese, how much importance does “Sandesa” come from his home for the soldiers living millions of distances away from their home and how much the family remembers them. stay lost, that’s what is depicted in this song. This song will prove to be an example in patriotic songs and will awaken the feeling of patriotism in the heart of every Indian.

The song has been picturized on Rajveer Singh, Shiv Singh, Lokit Phulwani and Abraham Khan.

You can watch this song “Original Music Gang” for free on this YouTube channel. The executive producer of this song is Bhupendrakumar Nandan.

“Sandesa” awakens the spirit of patriotism !