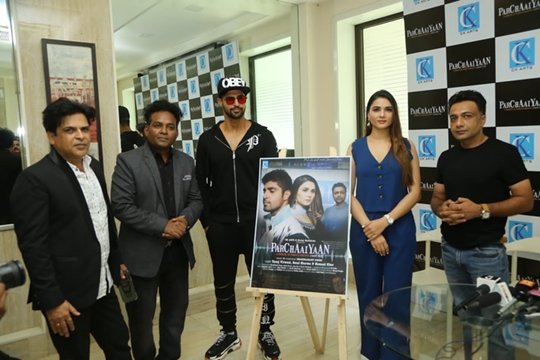 Starting from May 17, all roads will lead to the Palais des Festivals et des Congrès, Cannes, France.  The film fraternity across the world will come together to laud the best of world cinema at the coveted Cannes Film Festival. Joining them will be a proud moment for filmmaker Chandrakant Singh, who made short film “Parchaaiyaan” and will present this 32-minute short at Cannes Film festival 2022. The film ‘Parchaaiyaan’ is presented by renowned Enterprenuer and Film Trade Analyst, Girish Wankhede who is also one of the Producers of this film. The film will screened in Cannes 2022 and the entire team is excited. Starring Tanuj Virwani, Sezal Sharma and Hemant Kher, ‘Parchaaiyaan’ is a tribute to the most celebrated lyricist, Sahir Ludhianvi who gave Indian cinema a new direction and whose story is an inspiration to younger generations. In his lifetime, Sahir saheb was awarded multiple Filmfare Awards for his work in movies like ‘Taj Mahal’ and ‘Kabhi Kabhi’. His super hit songs from classic films like ‘Pyaasa’, ‘Naya Daur’, and ‘Phir Subah Hogi’, are truly exemplary.

While talking to Media, Actor Tanuj Virwani said, “I personally love the medium of short films and it’s an honour for our film to have this platform. We are going to attend Cannes film festival 2022. It will be a great feeling to be part of this”.

Girish Wankhede, who is again in limelight with this short film, says,’ I’m a huge fan of Sahir Sahab and getting me associated with something like this is a big high. Short Films space is dynamic and displaying this to the world in Cannes will set its course. We are quite ambitious and intend to travel the globe with this heartwarming film. Chandrakant Singh has done incredible job by justifying this romantic tribute and I look forward to the reactions in Cannes”.

The Inaugural WOW Mhahsa Season 2 was a Grand Success

Brand Walk by Mystique Events on this Mother’s Day